Whether you’re a cat lady or a dog guy you’ve probably heard that dogs have clean mouths and that cats have nine lives. Well, guess what? Those aren’t exactly true. Let’s sort fact from fiction and bust a few myths about pets, courtesy of MSNBC: 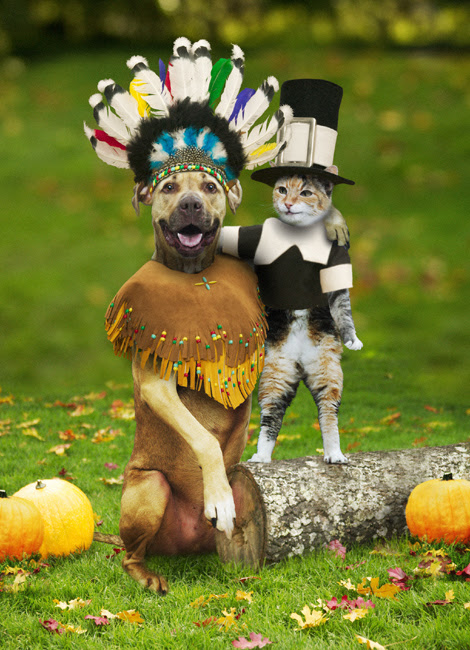 The countdown to Thanksgiving is on. I’m sure you’ve heard a lot of cooking advice over the years. Well, here are some tips from Bon Appetit Writer of the Year Harold McGee. He breaks down the most common Thanksgiving dinner myths.
Tesh.com
Posted by Digitally Delightful at 11:12 AM 3 comments:


You wouldn’t eat a cocker spaniel for Halloween! Yet each year, statistics show that the average North American eats 24 pounds of candy – or the weight of an average dog – mostly around Halloween. So, here’s a list of survival tips to help keep all that candy from settling around your waist! These come from Dave Zinczenko, co-writer of the popular Eat This, Not That books:
In case you’re thinking “a few small bites” of candy won’t hurt you on Halloween, consider this:
tesh.com
Posted by Digitally Delightful at 11:14 AM 2 comments:

Choosing a Facebook profile photo is very serious business. It's the visual that will greet high school acquaintances, jealous exes, and your parents' friends when they search you out. The image you project is entirely determined by your photo choice.
While people think that the photo they choose is some sort of individual statement, they're usually wrong. Here are the 10 most misguided approaches that people take when picking out a profile photo. Each sends out all sorts of information that the person may not have intended. And while there are some sub-genres and lesser known variations, most of the pictures on the social networking behemoth fall into one of these categories.

How to Spot It: A clear photo of the subject from the waist (or higher) up and includes the entire face.
What It Says About You: That you are a normal, well-adjusted adult who is confident in your appearance. Basically, you're pretty boring. However, if it is a headshot, author photo, or other promotional material, it means you are a narcissistic careerist. If it is a self portrait, you are slightly annoying. If the photo is of you in your bathing suit, you are probably hot and insecure.

The Far and Away

How to Spot It: The subject is so far from the camera that you can discern there is a person in the frame, but can't pick out any details of his face or appearance.
What It Says About You: You are a private person who doesn't want any old gawker knowing what the hell you look like. You are probably slightly shy and reserved until people get to know you. Either that or you got fat or had a botched Lasik surgery and you don't want the mean girls from college knowing about your gut/lazy eye.

The Up Close and Impersonal

How to Spot It: The subject is so close to the camera that you can only see part of her face or appearance.
What It Says About You: You want people to think that you don't want to be recognized on Facebook, but you really do and you mask that in pseudo artiness. You had an imperfection when you were younger (lazy eye, acne, stutter, irredeemably bad haircut) and still haven't gotten over being teased. Now you're the kind of person who is alone at parties not because you're shy, but because once people talk to you, they get annoyed.

How to Spot It: A picture of the subject when he was in his childhood, whether a candid shot or a school picture he made his mother dig out of a box in her attic.
What It Says About You: You are the type of person who thinks that everything in the past is better than it is now. You still listen to the same music, wear the same clothes, and love the same things you did back in high school/college, and you'll probably never change. You haven't amounted to much, and you looked much better as a child.

How to Spot It: A photo of the subject's pet, usually without the subject.
What It Says About You: It depends on what kind of animal it is. Cat: You are a woman without a boyfriend. Dog: You are  without a boyfriend or Michael Vick. Snake: You are a teenage boy or death metal devotee. Fish: You watch too much The Real World. Dolphin: You have a tramp stamp. Gerbil or Hamster: You are Richard Gere. Unicorn: You are awesome. Rabbit: Who has rabbits as pets?

How to Spot It: A photo of the subject's children and/or baby usually without the subject.
What It Says About You: The only thing you have accomplished in your adult life is having children. You used to be fun and fabulous and have lots of friends, but now all you can talk about is play dates, potty training, and Dora the Explorer. But don't worry, being a mother/father is the most important job there is. No really. We mean that. Yup, totally.

How to Spot It: Man, woman, dress, tux—you know, the usual. Even if it's a gay wedding, you know a wedding picture when you see it.
What It Says About You: You want everyone to think that you are a grown-up. You have settled down to a life of calm normalcy and Family Guy reruns. You're not playing the field  anymore. No, you are married! Also, you are entirely defined by your relationship and don't have any friends of your own anymore. You probably spent too much on the ceremony and your mother-in-law hates you.

How to Spot It: This comes in many forms: a picture of a fictional character, concert, a movie poster, a book cover, reality star, musical act, or a celebrity. Basically it is anyone who is not the subject. Even if done ironically, it's all the same.
What It Says About You: You have no personality of your own. You define yourself (and others) completely by their entertainment choices, whether they be television, music, sci-fi, literary, or otherwise. Talking to you like reading a list of movie quotes from an IMDb page and you are full of useless knowledge on your favorite subjects. You own at least two T-shirts with stupid slogans on them.

How to Spot It: A photo that somehow tries to be artistic and usually fails. This can contain the subject or not. It is often in black and white.
What It Says About You: You tell people that you are an actor, writer, photographer, or artist, but you are really a waiter, blogger, bartender, Whole Foods checkout person, or trust fund baby. Unless you have a trust fund, you will probably never make more per year than the cost of the liberal arts college you attended.

How to Spot It: The subject, often with someone else, clearly at a party. She may be holding a drink, drinking a drink,   playing beer pong, dancing on a banquette, or giving duck lips and gang signs.
What It Says About You: You are young and stupid and will be fired from at least one job for something you posted on Facebook. You are susceptible to peer pressure and you will one day regret this picture and replace it with a wedding picture, and then pictures of your children.
[Photo, top, via AP. All other photos via Facebook]
Just an FYI my Facebook pic is this...